The Keeper of Lost Things by Ruth Rogan 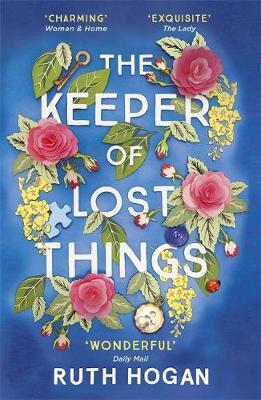 A charming, clever, and quietly moving debut novel of endless possibilities and joyful discoveries that explores the promises we make and break, losing and finding ourselves, the objects that hold magic and meaning for our lives, and the surprising connections that bind us.

Anthony Peardew is the keeper of lost things. Forty years ago, he carelessly lost a keepsake from his beloved fiancée, Therese. That very same day, she died unexpectedly. Brokenhearted, Anthony sought consolation in rescuing lost objects—the things others have dropped, misplaced, or accidently left behind—and writing stories about them. Now, in the twilight of his life, Anthony worries that he has not fully discharged his duty to reconcile all the lost things with their owners. As the end nears, he bequeaths his secret life’s mission to his unsuspecting assistant, Laura, leaving her his house and and all its lost treasures, including an irritable ghost.

Recovering from a bad divorce, Laura, in some ways, is one of Anthony’s lost things. But when the lonely woman moves into his mansion, her life begins to change. She finds a new friend in the neighbor’s quirky daughter, Sunshine, and a welcome distraction in Freddy, the rugged gardener. As the dark cloud engulfing her lifts, Laura, accompanied by her new companions, sets out to realize Anthony’s last wish: reuniting his cherished lost objects with their owners.

Long ago, Eunice found a trinket on the London pavement and kept it through the years. Now, with her own end drawing near, she has lost something precious—a tragic twist of fate that forces her to break a promise she once made.

As the Keeper of Lost Objects, Laura holds the key to Anthony and Eunice’s redemption. But can she unlock the past and make the connections that will lay their spirits to rest?

Ugh. I’m having a very hard time writing this review. On the one hand, The Keeper of Lost Things is a sweet feel-good story and a very easy, undemanding read. And yet, it is so much more than that. It’s a story about being lost and found, a story about love, about connections, about friendship, trust and, maybe more than anything else, a story of redemption.

There is an awful lot going on in this book, and there are quite a lot characters, both as main players and in the background. There appear to be at least two, unconnected (or are they?) story-lines when the book begins, and it takes a few chapters before the story settles enough for the reader to fully understand who is who, if not how they all connect to each other.

I realize, these two paragraphs appear to contradict each other; how can a light, easy read possibly be as intricate as I describe? And try as I might, it’s not something I can explain, except to say that the apparent contradiction was one of several things that impressed me in this book. The way in which two story-lines, eventually, came together is rather ingenious, especially since, as soon as they did, I realized the clues had been there from the start.

And all of that is before I mention that there’s also a magical twist to this story, be it presented in such a matter of fact way that it never felt contrived or even out of the ordinary. I accepted Sunshine’s ‘sixth sense’ and the presence of a ghost as easily as I accepted the fully human characters. And, while I’m on the subject of characters, I liked virtually everyone I encountered on these pages. Some characters took some getting used to while others charmed their way in from the moment they were introduced, but all of them left an impression in the long run—even those who appeared to be an over-drawn caricature.

Maybe I’m making things too complicated. Underneath the magic, there’s a very human story of lost, hurting, and lonely people finding and helping each other, and in the process, themselves. The various tales are told in a gentle, light-hearted way and yet never disguise the deeper emotions laying underneath the surface, which I guess makes The Keeper of Lost Things a very good summer/beach read.