On the Third Kiss by George Loveland - Review Tour 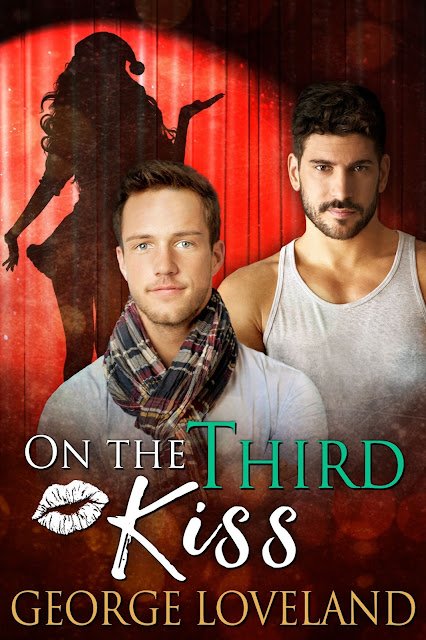 Sebastian Bennett is really looking forward to his Christmas holiday with boyfriend Elliot Bolton in the Gran Canarian sun. The only thing left is for him to sing one last song at the pub as his Drag Queen alter-ego, Donna Tracey. After the wig, make-up and dress come off, he rushes home to pack, only to find he and his chihuahua, Buster, have been deserted by Elliot, who’s taken someone else to Gran Canaria. Devastated, Sebastian turns to his friend and the pub’s manager, Javier Reyes-Martinez, who helps him pick up the pieces.

Javier seems determined to bring fun and laughter back into Sebastian’s life during this holiday season, and Sebastian is both grateful and enchanted. After a family Christmas and a word of advice from his great-uncle, Sebastian starts to look at Javier in a different light. Is Javier as fond of Sebastian as he appears, or is Sebastian being misled by his own need? If he’s reading the signs right—and if he’s ready to move on from his previous heartbreak—could he and Javier be much more than friends?

Poor Sebastian has a problem seeing what is right in front of him.

First there is Elliot, his boyfriend and business manager. When Elliot deserts Sebastian and takes someone else on the holiday that should have been a Christmas away for the two of them, it comes as a bolt out of the blue for Sebastian. Until he thinks about his recent past with Elliot and comes to recognise that he just missed the warning signs.

But, obviously blindness is a stubborn thing, because it plagues Sebastian just as much when it comes to Javier. It is (almost painfully) obvious that Javier has fallen for Sebastian, but our jilted lover first doesn’t see it, then refuses to believe that what he sees is actually there, no matter how many others point out the obvious to him. Sure, his reluctance to believe in love and to submit to attraction makes perfect sense given what he’s just been through, but still, on more than one occasion I would have lovingly slapped him; if only because his (lack of) actions had to be difficult for Javier.

Javier. *Sighs*. Now there’s a man worth waiting for. Patient, considerate, a good friend first and lover second, Javier is everything Sebastian needs when his life falls apart and, if he can just take of the blindfold, everything he’ll ever need for the rest of his life.

This is a sweet, touching, and adorable story, not to mention that at times it is laugh out loud funny. It features two adorable MCs, but more than that, it also gives us a fabulous cast of secondary characters. Top of that list is, of course, Buster, Sebastian’s Chihuahua. But his family comes a very close second, as do his friends and colleagues, especially Dave aka Miss Belle End.

If you’re in the mood for a story that will pull on your heart strings in all the right ways and will leave you with a smile on your face and a sigh on your lips, you probably want to pick up On the Third Kiss.


George was about eighteen when he told his friend that he was going to be a writer. It took him another eighteen years before he finally did anything about it and wrote his first short story. A typical Englishman, he drinks buckets of tea with milk—but no sugar, because he is sweet enough. His Nan told him so.

George lives just outside of London, but close enough to enjoy Soho and the West End, where you will find him in a bar with a pint, in a club dancing into the early hours of the morning, or enjoying a musical in the theater; but more than likely he will be in a coffee shop reading a book or writing a new story. Currently single, but taking applications for future husband position, George enjoys crafting romantic stories in which he hopes that one day, life will imitate art.