As always it is my pleasure and honour to welcome Nikka Michaels to my blog. Read on to learn all you want to know about her latest release. I can't wait to read it later today. 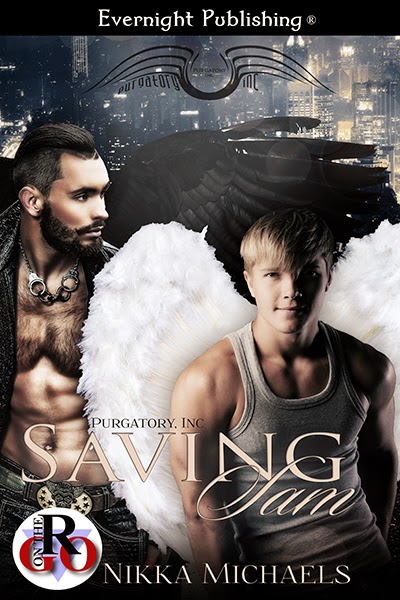 Line: Romance on the Go

When Ezekiel the Watcher Angel, requested a promotion he wasn’t expecting Steve, his boss and Higher Power to command him to bring back Azazel, Death’s assistant. Throw in the devil in a blue dress, a looming deadie apocalypse and a partner in an Archangel named Sam and Zeke might just earn his Guardian wings.

I looked up from my clipboard and froze. Standing in front of me, radiating divine power, was an older man with long white hair pulled back into a ponytail. He wore board shorts, a T-shirt, and flip-flops, and reading glasses hung from a chain draped around his neck. With a smile on his friendly face, he didn’t look like the higher power hundreds of religions called Heavenly Father, but more like a kindly hippie grandfather.

I pushed to my feet and promptly tripped over the length of my wings. In my most mortifying moment, God caught my arm and saved me from a face-plant onto the ugly industrial carpet. “Oh, God. Shit. Jesus.”

He chuckled and brushed me off. “Don’t worry. Not the first time I’ve heard My name. You should hear this place around Valentine’s Day.”

“As for Jesus? My Son works in accounting. You should introduce yourself sometime and bring them donuts. Nothing excites accounting like free sugar.”

He flinched at my words, and I closed my eyes, sending up a silent prayer. To where, I had no clue, as The Man was standing in front of me. At this rate he no doubt planned to bust my ass down to angelic lawn statue.

“Whoa there, partner. We’re pretty informal around here. Can I call you Zeke?”

The Supreme Being smiled and patted me on the back, and I swallowed hard.

The man snorted. “Just call me Steve.” He gave me a once-over, and I wondered if my khakis and polo shirt were workplace appropriate. “Walk with me, Zeke. Oh, and unfurl the wings a little. You’re harshing my spiritual buzz.” Without another word he turned and took off down a hallway, the sounds of his flip-flops echoing.

I hurried to catch up, cursing my clumsiness.

“As you can see, there isn’t a formal dress code while in the office. Most of the staff favor business casual so they don’t have to change before golf in the afternoon. There’s a coffeemaker in the break room. Just don’t leave empty creamer containers in the fridge without replacing them. The last guy who did that lost his head. Literally.”

“Oh, don’t worry. We found it again, but the Archs get cranky when they don’t get their caffeine. How many times do I have to tell them to leave the swords at home when they’re not out in the field?”

“Yep, don’t mind them too much. They’re usually more bark than bite.”

As we walked down the hallway, I caught glimpses of beings seated at desks in cubicles. Some were speaking into headsets, some drinking coffee, and one was tossing pencils at the ceiling. It seemed just like every other office I’d ever seen on Earth. Except for the wings.

“This is the Heavenly side of the pod, by the way. Through that door over there is our counterpart. Some of the staff call them the baddies, but they’re not all bad. Except Cerebus keeps peeing on my rug. Damned dog.” He stopped in front of an office and gestured for me to enter.

“Thanks,” I mumbled as I opened the door. I stopped short with surprise, and Steve bumped into me.

Slumped on a chair in front of a large desk was a huge male of obvious celestial rank. His inky black wings fluttered, then folded, blending in with his leather jacket and black jeans. His dirty biker boots, which he’d propped on the desk, were encrusted with dirt and blood, and I swallowed down a wave of fear.

When he met my gaze, something I’d never felt before flooded my system: lust. Or disgust… possibly a mixture of the two.

The man grinned at me, a flash of white teeth against his darkly handsome features.

“Oh, this is going to be good.” He purred in a low growly voice. “Fresh meat.”

Nikka Michaels lives in the Pacific Northwest where she spends her time cooking up romantic tales to satisfy her craving for HEAs with heat. A voracious reader, novice knitter and music lover she’s been known to multitask without breaking a sweat. She loves to read and write M/M romance but believes everyone deserves a love story.