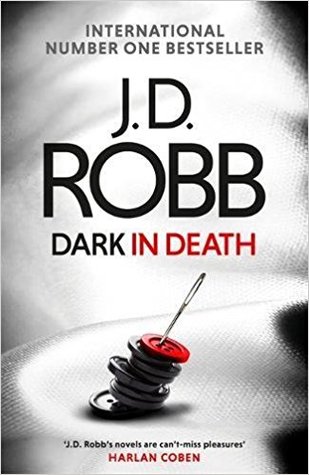 There’s always a reason for murder. But when a young actress is killed in a swift and violent attack at a cinema screening, that reason is hard to fathom—even for Lieutenant Eve Dallas and her team.

It’s only when bestselling crime writer Blaine DeLano arrives at the precinct that the shocking truth is revealed. Someone is recreating the murder scenes from her latest series, book by book. With six more books left in the series, Eve now knows how the killer will strike next. But why has Delano been targeted. Could her abusive husband be involved?

As fiction is transformed into bloody reality, Eve will need all her skill and experience to solve this unique case. Luckily for her, husband Roarke happens to be a fan of DeLano’s work. And he’s more than happy to work side by side with his brilliant wife—no matter how dark things become.

Boy did I love this book. Don’t get me wrong, I’ve adored this series from book one, but every now and again there’s an instalment I like just that bit better; this was one of them.

On the back of plenty of crazy in the world of romance and its writers, J.D. Robb takes the obsession with writing and (a) writer(s) a few steps further to a somewhat horrifying level. I can’t imagine writing murder mysteries and having some crazy person replicating my murders in real life, but I’m fairly sure I’d never write another word if it happened to me (or at the very least switch genres).

But, apart from the gruesome nature (especially from a writer’s perspective) of the murders, this book is in many ways an ode to reading, to books and yes, also to writing. This is a thriller, a page-turner, but there was time to describe the delight of walking into a well-stocked library, the joy of sitting in front of a fire and read a book (with a cat draped over your lap). Even for the murderer it’s an obsession with the written word that motivates their actions—even if they do take it to the level of cray-cray.

As usual, all my favourites were present in this title too. I’m always delighted to reconnect with Eve, Roarke, Peabody, McNab, Mira, Nadine and all the others. Eve’s exasperation with the English language and her very sexy and always entertaining relationship and interactions with Roarke are staples I look forward to before starting one of the In Death books. Just as I’m always happy to see Peabody and Eve or Eve and Nadine verbally spar. In fact, a big part of my love for this series is probably how well I’ve gotten to know these characters. In many ways they’ve turned into friends I get to visit with twice a year; always wishing it would be more, always grateful for what I’m given. (And, oh my god, now I sound almost as delusional as the perpetrator in this book.)

I have to say I’m surprised and delighted that these stories still bring me so much joy, even after 46 titles. With other series I’ve become hooked on in the past, I sooner or later lost interest, either because the books felt too much like more of the same or because the author started taking the story-line to what in my eyes was the ridiculous. And there’s no denying that the In Death stories contain many familiar scenes (like those I described above) but in these books they don’t bother me at all; in fact, that familiarity is one of my main reasons for always wanting more.

On which note I only want to add that I’m now more than ready for the next instalment.