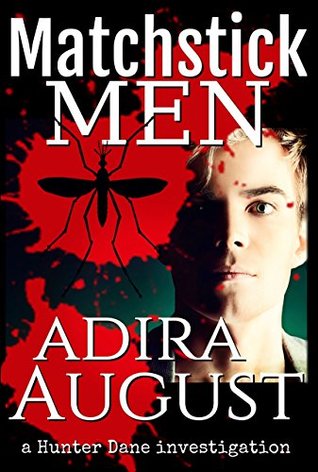 Detective Sergeant Hunter Dane, reigning champion, looked forward to a relaxing evening to start his 3 days off. A few beers on the deck. An interlude with a sweet sub. Stumping a challenger with a new puzzle. Home early for a decent night's sleep.

Some people are SO deadly serious about their games.
Now Hunt has a fresh body and a new puzzle to solve in twenty-four hours if he wants to find a killer.

Occasionally I read a book that enthrals me to such an extent that I have no idea how to write my review or what to put in it, apart from ‘this book is magical! Go buy and read it! Now!’

Matchstick Men was exactly such a book. I knew from the start that I was going to be in for a treat. I read On His Knees, the prequel to Matchstick Men, only two days ago and that short story blew my mind away. I yearned to spend more time with Hunt and Cam and was over the moon that the sequel was ready and waiting for me.

I’m still not entirely sure what to say about this story. It is clever, well plotted, perfectly paced, extremely hot, and impossible to put down. And, what’s more, this book actively involves the reader in the mysteries it contains. Of course there’s the murder itself. And, I have to admit, that I had the murderer pegged from the start. That is however no shortcoming on the author’s part but rather the result of me having read so many mysteries that I’m almost too good at recognising how the plot works. And besides, watching Hunt and Cam come to the conclusion I had reached earlier on was as fascinating as trying to figure out the mystery for myself would have been.

But, as much as I enjoyed the mystery and the resolution of it, my main interest (some might say obsession) in this book was the developing dynamic between Cam and Hunt. And, between the two of them, it is Hunter who has really piqued my interest. He is so sure he’s got himself completely figured out.

Hunter made no claim of sexual preference (…) He formed no attachments. He simply wasn’t able to.

In other words Hunt:

(…) needed men for power, women for sex and no one for intimacy.

Except that this lack of emotional attachments appears to be less black and white than Hunt likes to think. He may have convinced himself that he doesn’t form or need those bonds with others, I remain to be convinced. As does Cam, who refuses to take no for an answer and knows exactly what Hunter needs, when he needs it, and how to give it to him. In On His Knees Cam gave Hunt what he needed in order not to break:

“Extreme Domism (…) There are no limits. You have no safeword. You do nothing I do not order. I don’t stop until I’m done… You have one chance to walk away. Once I restrain you, nothing and no one can or will rescue you. I am all there is.”

In this book, while the Dom is still there a lot of the time, the extreme is in the background because it’s not what Hunt requires and because Cam now wants more.

“I want you to do what I say because you trust me to make you to feel good. Because you want from me what I want to give you.”

And so Cam introduces Hunt to another beautiful first.  No, I’m not going to tell you what that was, read the book J I will say that the moment took my breath away.

And yet, despite all his Dominance, Camden is ‘just’ a twenty-something young man. And I guess that’s one of the many magical aspects about this book; that Cam is not portrayed as the big bad Dom. He’s allowed to be young, and overwhelmed, and even out of his depth. Just as Hunt is so very much more than ‘just’ a sub (or even a switch). Hunt and Cam are a two way street and when they collide in the middle it is poetry in motion.

Through Cam’s eyes the reader gets to recognise that Hunt doesn’t see himself as clearly as he sees the world around him. And while he’s nowhere near ready to admit to himself that maybe he is capable of becoming emotionally attached to someone else, his own thoughts betray him at times.

“It occurred to me then, that Camden Snow was possibly the most complex, interesting person I’d ever met. Child. Champion. Clever analyst. Extreme Dom. And I barely knew him. It would be easy to become kind of obsessed with him, with solving the puzzle that he was.”

I apologise. I’ve been rambling above and I’m afraid I’m not sure how to fix it. I will however try to summarise my thoughts.

Matchstick Men is a combination of several intriguing mysteries. There’s the murder in the story, there’s the question who and what Hunter really is, and there is the matchstick puzzle for the reader to solve (answer kindly provided at the end of the book). Apart from that there’s the story about Camden and Hunter which takes us from (extreme) BDSM to pure love and back again. Every single aspect of this story is spellbindingly intriguing. It is safe to say that Adira August has captured me. I’ve only just finished this book and I’m already yearning for the next one. And I’ve got a feeling that if we ever get to ‘A Hunter Dane Investigation #3674’ I’ll still be gagging for more.

Related review: On His Knees.
This book is available as an Instafreebie until July 31, 2017.

Click on the link above to go to the giveaway where twenty (20) e-copies of
Matchstick Men are up for grabs.

Matchstick Men and this giveaway can also be found on the following blogs: