The Contingency Plan by Addison Albright - Release Blitz with Review 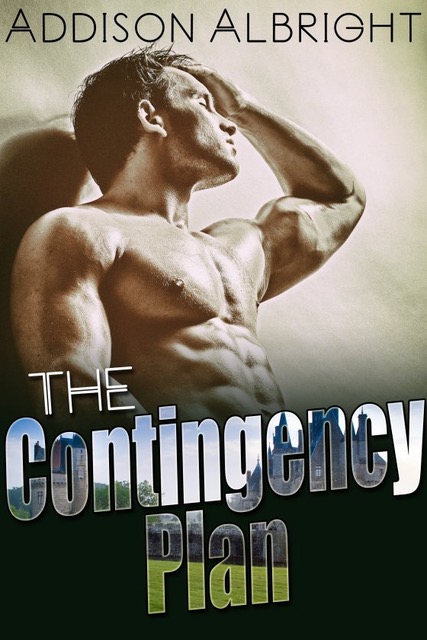 A sheltered prince. A sudden death. An unexpected choice. How will Prince Marcelo react to discovering he’s The Contingency Plan?

For eighteen years, there has been peace between Sheburat and the kingdom of Zioneven. The untimely death of a princess throws the marriage arrangement -- the final phase to complete the terms of the treaty -- into disarray, and the contingency plan is put into motion. Now the Crown Prince of Zioneven gets to make his own choice from among the princess’s younger siblings.

As a rare royal son in the matriarchal sovereignty of Sheburat, Prince Marcelo grew up knowing he would never marry. Never. Royal sons did not marry. Period. Except, Prince Efren isn’t from Sheburat, and he has other plans. 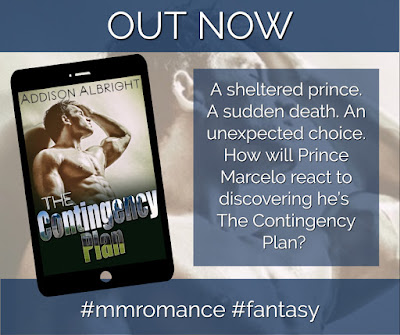 With everyone now in attendance, Queen Giselle stepped forward. “Your Royal Highness, Ladies and Lords, and people of Zioneven, please accept our warm welcome to Sheburat, and I hope you’ll accept our sincere apology for the chaos in which you find us today.”

Prince Efren inclined his head. “Of course, Your Majesty. On behalf of Zioneven, I offer our heartfelt condolences on the loss of your beloved daughter.”

“Indeed.” Prince Efren kept his reply short, perhaps diplomatically leaving it to Queen Giselle to either further the conversation toward whether or not he was ready to choose his alternate, or to wait for a time when her grief would be less immediate.

His mother would put diplomacy first, Marcelo didn’t doubt that. The conversation may or may not happen today, but it would occur during this visit. Diplomacy always came ahead of personal concerns.

“Although disappointment caused by the cancellation of the wedding we’d expected tomorrow is unavoidable,” Queen Giselle said. “I hope you’ll find a small comfort in knowing that you may now make your own choice of your future bride from among my younger daughters rather than the arrangement made on your behalf at the tender age of five.”

“Sibling. The terms of the treaty specify I may choose an alternate from among Princess Marcela’s younger siblings. It didn’t restrict the choice to daughters.”

Marcelo stiffened. What in the world could Prince Efren mean by that? Men didn’t marry men. At least, he’d never heard of such a thing occurring in Sheburat. Marcelo wasn’t alone in his bewilderment. Everyone on his side of the room stilled. None of the faces opposite them exhibited confusion. Was that an acceptable option in Zioneven’s culture?

It was only by mere minutes, but Marcelo did qualify as a younger sibling to Marcela.

For the first time in Marcelo’s recollection, his mother faltered. “Do…surely…but…”

Marcelo turned his head toward her, his wide eyes silently imploring her to voice an objection. Kemble may have recently grown complacent thinking herself in the clear, but she’d at least spent her life knowing she was the likely backup plan.

As a royal son in this matriarchal society, Marcelo had grown up knowing he would never marry. Never. Royal sons did not marry. Period.

He’d been perfectly happy with that knowledge because he’d never experienced the attraction that men outside the royal family felt toward women. In fact, he’d enjoyed knowing he would not have to merge his life with a woman’s with the expectation of having to bed her.

His gaze flicked back and forth between Queen Giselle and Prince Efren before settling on the prince. Prince Efren had kept his eyes locked with the queen’s, but as if sensing Marcelo’s scrutiny, his head turned to reflect Marcelo’s regard.

Marcelo’s heart thudded so vigorously in his chest, surely everyone in the room must hear it. His respiration quickened. That single word uttered by Prince Efren had shattered Marcelo’s understanding of everything he knew about the world and had expected in his life.

Queen Giselle remained frozen for a few more moments, her brows drawn together as she processed the unexpected direction of this discussion. She cast a brief, apologetic glance toward Marcelo, then lifted her shoulders in a barely visible shrug. “The treaty does indeed use that word. Prince Efren, the choice is yours.”

Marcelo’s stomach dropped as her words echoed through the silent hall even though he’d known in his heart that she’d put Sheburat before her son’s individual concerns. So, he felt no personal betrayal. It was who is mother had to be.

Prince Efren continued to stare at Marcelo as he firmly stated, “I choose His Royal Highness, Prince Marcelo. The wedding will proceed tomorrow as planned.”

Marcelo swayed as the blood drained from his face. How could this be? How did such a marriage work? Would he be expected to—

“Marcelo?” Suky’s whispered tone voiced her concern. “Are you unwell?”

She repeated the words, but from farther away. Or did her voice only seem distant? He wobbled as the people around him faded, and then, thankfully, this nightmare all went away.


After insta-lust and insta-love this story can probably best be described as ‘insta-everything’. J

But I’ll start at the beginning. This is a short story that needs to be read with a certain level of suspension of disbelief. But, since this is a fantasy, I found it easy to get caught up in the … well … fantasy. And I have to admit that it makes a nice change to read a story in which two young men see each other for the first time, experience attraction, and are able to act on it despite the fact that their coming together breaks with a long list of conventions and traditions. Sometimes all I want is a little bit of sexy and happy, and this story provided me with both.

I’m rather impressed that the world this story is set in has come to life for me, despite the fact that the short story format didn’t allow for extensive descriptions and explanations. With just a few words the author managed to explain both Marcelo’s matriarchal society and Efren’s more traditional (by our standards) country.

While I wouldn’t have complained if this story had been longer, and would certainly read any further tales about the two princes, I don’t feel this story needed to be longer. By the time it ended I was happy in the knowledge that both MCs were in a good place, together.

Yes, this story is almost closer to a fairy-tale than a fantasy. Yes, all of it is too good and too smooth to be true. But, also yes, this was a delightful little story and a most wonderful and entertaining way so spend part of a rainy afternoon. 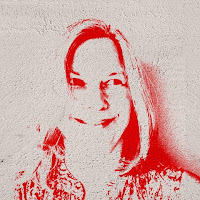