The Farther He Runs by Lynda Aicher 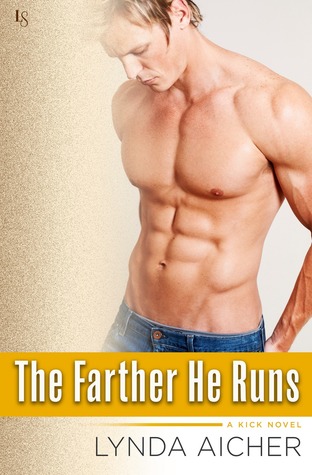 In an explosive novel of long-awaited release from the award-winning author of The Deeper He Hurts, two emotionally exposed Marines learn to lean on each other—and discover the courage to act on their innermost needs.

After years away from home, Tanner Dorsey is back and sorting through feelings that have him in a stranglehold. The hardened Marine will do anything for a fallen comrade, so when an accident leaves Finn Kelley fighting for his life, Tanner’s eager to be there for him. In fact, Tanner’s ready and willing to do anything Finn asks—especially if it means finally acting on the sexual tension that’s always kept him craving more.

Finn senses it too—when he brushes against Tanner’s stubbled jaw, when he inhales the scent of the T-shirt that clings to Tanner’s body like a second skin. Now that he’s more vulnerable than ever, Finn knows the time is right to take control, even if it means risking the heart and soul of their friendship. The bond they share goes beyond desire; it’s a bond of brotherhood, forged under conditions few could imagine. But once they cross that line, there will be no more secrets. No more boundaries. And no turning back.

I received my copy from Loveswept through Netgalley in return for an honest review.

The Farther He Runs is the third book in the ‘Kick’ series but can, in my opinion, be read and thoroughly enjoyed as a stand-alone novel.

This is one emotionally charged book. Finn and Tanner put themselves through an emotional wringer and pull the reader right along with them. From the opening chapters, when they say goodbye to the brother they lost, through the doubts and raging sexual tension, to finally giving in to a love and attraction they’ve both been hiding for years, they kept me hooked on their every thought, action, and feeling.

When Tanner and Finn at last give into the heat flowing between them (after what may well be the hottest workout known to men) it means that Tanner can at last show sides of himself he’s been hiding for decades. He embraces his gayness and allows his submissive side to surface.

“He’d never be a submissive in the purest sense of the word. Yet he longed to give his control over—even for a little while—to Finn and know, without question, that he’d be safe.”

Even more stunning than Tanner’s willingness to give his all in the aid of Finn’s recovery, is Finn’s growth from broken and close to desperate victim, to strong and dominant survivor. I found myself cheering him along every time Finn recovered another part of his old self as he and Tanner spend time together and push him towards life again.

“Lust blazed. Want called. Desire begged.
And Finn responded. His dominant side breaking free to take everything Tanner was offering.”

Finn’s journey was a marvellous thing to read. There are no short cuts for him; he doesn’t get an easy ride. Every step is hard, painful, and often frustrating and yet he perseveres because Tanner won’t allow him to fail. I felt such joy as he grew, got stronger, found himself again, and became all he had always been; everything he had lost.

Tanner on the other hand…. *sighs*. What to say about Tanner? On the one hand he took my breath away. Everything he’s willing to do Finn, the way he opens up, gives all of himself to the man he’s loved in secret for years, is nothing short of stunning. He bears his soul and hides nothing because his love runs deep and he’ll go to hell and back if it means helping Finn to become the man he’s supposed to be again. And yet…. When his leave is up and it’s time to say goodbye I could have taken him by the scruff of his neck and shaken him like you do a naughty puppy. Boy did he frustrate me. I wished for means to dive into my Kindle and confront him, tell him to embrace and accept himself as Finn does and stop hiding. I had a hard time reading that part of the story. In fact, I seriously considered skipping it. Part of that was my inability to deal with angst, especially when it happens to two characters I’ve come to care deeply about, and part of it was pure frustration with the character. I didn’t, of course, because if an author is able to make me get that drawn into a story it’s impossible not to read every single word, no matter how painful they may be. And of course it paid off...in the most wonderful fashion. Tanner may have needed a bit of a push, but when he does come through, he bloody shines.

These guys are, at times, literally able to read each other’s thoughts. The first time I encountered that it made me frown for a moment and then I loved it. Because I know it to be true that once you know someone well enough, love them deeply enough, and spend enough time with them, you do reach a point where you know what the other is thinking, long before they open their mouth. And Finn and Tanner had loved and known each other for a long time. And, what’s more, they’d been in situations where being able to communicate without words had literally been a matter of life and death; being a Marine will do that to you.

“Love me like no one else ever has. Be my strength when I can’t be strong. My courage when I’m scared shitless. My confidence when I’m doubting.
“I will. I do.””

Lynda Aicher has always had a habit of messing with my heart. More often than not her stories take me beyond my emotional comfort zone. But every single time I’ve allowed her to take me where I wasn’t sure I wanted to go, she’s rewarded me by giving me the most memorable of reading experiences. This story may have pushed me harder and further than any of the previous ones; it also had me crying happy tears when it ended. I totally recommend this steaming hot, emotionally engrossing, and very memorable story featuring two men I’m not likely to forget any time soon.

And with that, I apologise for yet another gush-fest.

“Finn was his point, and Tanner would have his six for the rest of his life.”

“Tanner was his point, and Finn had his six.”

Links to my reviews of previous ‘Kick’ titles:

The harder He Falls  The Deeper He Hurts