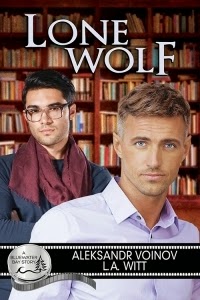 “Hunter Easton is screwed. Fans, producers, and his agent are all chomping at the bit for the next book in his wildly popular Wolf’s Landing series, but he’s got epic writer’s block and is way behind deadline. Then he reads The World Tree, a fanfic novel by his online friend “Lone Wolf.” It isn’t just a great story—it’s exactly what the series needs.

Kevin Hussain is thrilled when “Wolf Hunter” wants to meet up after reading The World Tree. When Wolf Hunter turns out to be Hunter Easton himself, Kevin is starstruck. When Hunter tells him he wants to add The World Tree to Wolf’s Landing, Kevin is sure he’s being pranked. And when their online chemistry carries over—big time—into real life, Kevin is convinced it’s all too good to be true.

The problem is . . . it might be. The book deal, the sex, the money—everything is amazing. But fame isn’t all it’s cracked up to be, and Kevin is left wondering if Hunter really loves him, or just loves his book.”

Regular readers of my reviews may have noticed I’m somewhat of a fan of Aleksandr Voinov and L.A. Witt, both when they write together and when they publish solo works. I adore their writing; it draws me in, sounds exactly right to my ears and their characters always come alive on the page. Lone Wolf was no exception to that rule. I found myself in the middle of the story before the end of chapter one. Both Hunter Easton and Kevin Hussain captured my interest from the moment they were introduced and the fact that both of them are authors and the stories centres around writing and all the pitfalls an author may face, only increased my interest.

By now you’re probably wondering why I didn’t rate this book higher than 3.5 stars. Let me try to explain.

I saw that both authors have described this book as the closest they will ever come to writing romantic comedy. Now, I know I lack a sense of humour, or maybe mine is just not like everybody else’s. Because I’m well aware of that ‘flaw’ I usually avoid romcoms.  In fact, if I’d read that description before requesting the book I might not have gotten it at all. However, I wouldn’t call this a comedy. It is light hearted, for sure. It is also sweet and I can’t deny it made me smile on several occasions but those were indulgent smiles more than laugh out loud moments.

This book had me veering between deep fascination and a feeling of ‘get on with it already’. On the one hand I couldn’t get enough of the background into writing, fanfic, writers block and everything else related to publishing. Books about writers and publishing always fascinate me. I mean the authors of those books know what they’re talking about, so apart from a good story you are also getting background information. What’s not to like?

On the other hand though I got bogged down in the story at times as well; everything seemed to take longer than it needed to. I’m not sure I can explain exactly what I mean here and I’m well aware these are personal rather than general observations. For me a lot about this story was ‘too’ something or another. Kevin seemed a bit too insecure and fragile, Hunter a bit too unobservant and stand-offish. The agent seemed to take Hunter’s breaking of the rules a bit too easily, the contract came together a bit too quickly and yet the story as a whole felt a bit too long.

Having said all of that, I enjoyed this book far more than I struggled with it. Because, as always, it is written in such a way it almost seems to read itself and features characters I enjoyed spending time with – even if I did want to slap them on more than one occasion.

So, while Lone Wolf wasn’t my favourite book by these two authors, it most definitely was an enjoyable, sweet and at times angsty story with a nice and occasionally cynical insight into the world of publishing. As much as I would love all the books by my favourite authors to be five star reads, I guess that is unrealistic. As long as Aleksandr Voinov and L.A. Witt continue writing stories I can lose myself in, they’ve got a fan for life.
Posted by Helena Stone at 17:34