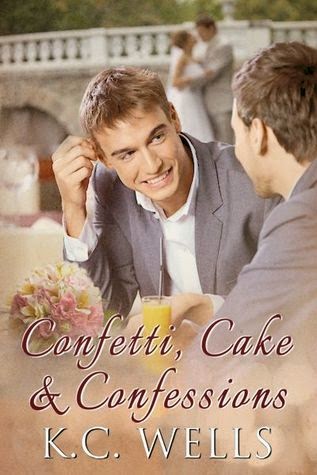 “Tony Porter and Marc Powell had lived in the same house for the past eight years, since their single parents moved in together. When Tony’s mother Marie and Marc’s father Dennis decide to tie the knot at last, it should be an occasion of great joy for everyone. Except all Marc can think about is having to spend the next two weeks with the young man he’s been in love with since he was sixteen.

Tony feels so torn about Marc coming home from college. He keeps telling himself that it’s wrong to feel this way about him. After all, in two weeks’ time they’ll be related. So when the two young men are thrown together to prepare for the wedding, tensions rise and discoveries are made.
It’s going to be a very long two weeks, and a wedding that no one will ever forget.”

Confetti, Cake and Confessions surprised me. I’m not a huge fan of angst driven stories and boy does this story contain angst. In this book it works though. It makes complete sense for Tony and Marc travel from fear to uncertainty, from ecstasy to despair and from heartbroken to happy.

The boys have known each other for years and have shared a house and family for most of that time. Individually they moved from a familiar affection to attraction and even further. Neither knows the other is gay. And especially Marc is worried about how a relationship between the two of them might be perceived, by the rest of their family as well as the rest of the world.

As much as I wanted to knock Mark and Tony’s heads together on several occasions, the story was entirely plausible. The situation they find themselves in is awkward at best. Neither of them are out to their family and their parents are about to marry. Not only that, they’re also young  - barely out of their teenage years - and in love for the very first time. Each of those factors would be enough to cause issues. Put them altogether and it’s a miracle they didn’t combust.

Their two week journey from step-brothers to lovers was mesmerizing; their fear, uncertainty, happiness, and desperation where palpable. Their sexual explorations managed to be both sweet and extremely hot at the same time. Maybe the ease with which these two virgins got everything right the very first time was somewhat unrealistic but it didn’t really bother me. By that time they’d put each other and the reader through so many ups and downs we all deserved a satisfying climax.

It was refreshing to read about a happy and accepting family for a change. A lot of books feature disapproving families, kids being thrown out because they are gay, bullying and desperation. While Tony and Mark run into a few obstacles, those stem from their own doubts and foolish actions, not from any prejudice held by those around them.

K.C. Wells writes a wonderful story. She creates multidimensional characters that come alive on the page. Conversations between the characters sound true and sparkle. This book contained just the right mix of toe curling angst and light relief; the characters are on an emotional roller-coaster and the reader is right there with them. The result is a captivating story that grabs you by the throat and doesn’t let go until you’ve reached the end.
Posted by Helena Stone at 23:10