The Harder He Falls by Lynda Aicher, a pre-release review

The Harder He Falls by Lynda Aicher 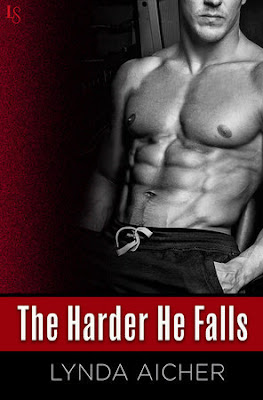 Expert whitewater-rafting guide Grady Kelley lives for that rush of adrenaline: at work, as the newest employee of a Portland-based outdoor-adventure sports company, and off the river, where liaisons with anonymous men keep him satisfied. Grady prefers no drama and no strings attached, but when tragedy strikes, fate leads him to Micah Swaine. He’s hot, masculine, distracting—and offers the kind of deeper connection Grady has sworn off, no matter how badly he craves it.

Working at a leather bar, Micah meets a lot of guys, but Grady’s different—and he seems to feel the same way. The trouble is, anything beyond casual sex is too risky for Micah. He’s got secrets he doesn’t know how to share, secrets that would make any relationship a battlefield. No man, even one as compassionate as Grady, would stick around for that kind of trouble. And yet, as physical desire melts the walls they’ve put up, Micah and Grady discover that trusting each other is the most exhilarating adventure of all.

“I want you, Micah. I want everything you offered and was too late to take. I want to give you my power and make you take it. I want to wake up in your arms and hold you when you’re lost. I want…all of it. But I have no fucking clue why you’d ever want me.” – Grady

How do you forge a relationship when both men involved are convinced they’re not good enough for the other? That is basically the crux of this wonderful story.

Micah…oh Micah. I fell hard for this man. The after effects of the coma he’s been in, appear to limit his life in numerous ways. But despite all the obstacles his condition creates for him, he forges ahead, first to create a life for him and then to support a man who is about to fall apart. Grady may not know it, but he needs Micah like he needs air. But Micah needs Grady just as much.

The attraction between these two men is obvious from the moment they meet and the one constant between them. For reasons he can’t quite explain to himself, Grady allows himself to let go of some of his self-imposed restrictions and his resulting coming together with Micah is a thing of beauty.

“Tangling with Micah was the ultimate rush of danger. He was flying free with no crash helmet or safety pads. Reckless. Stupid. Risky. But he had nothing to lose—except his pride.” – Grady

“Everyone has something that sucks in their life. It’s all about learning to deal with it and moving on.” – Micah

I’ve been rambling again, and you know what that means. J I adored this story. I fell hard for Micah and couldn’t help hurting for Grady. Their story held me spellbound. And I can’t wait to read the rest of this series. I want to know the stories of the other men at Kick and I need poor Finn to get his own story and happy ending.

“None of us are lily white and issue free. Relationships are about loving someone despite their shit. Maybe because of it.” – Dane