I’m delighted to welcome J.T. Cheyanne and her new release Collateral Damage to The Way She Reads today. Below you will find everything you want to know about the book as well as an enticing excerpt, but we’ll start with a guest post about baby showers which asks a very good question. 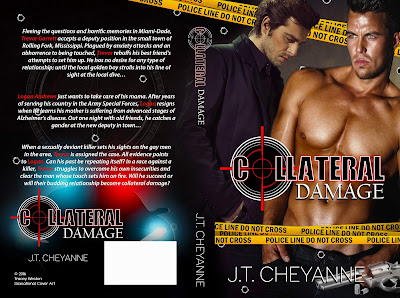 To Pink or not to Pink

Here is what I was told. Women only. That made it a traditional baby shower. What? How? And by whose definition?

The father of the baby was told he WAS NOT invited to the shower. He wasn’t asked not to come, he was told point blank he could NOT attend. Now this irritated me to say the least, but before the opinion, let’s have a little history.

The “hostesses” of the party asked the expectant mother for a guest list which she provided. The list contained the expectant daddy’s name and the names of his entire men’s softball team. Cue the drama. Hostess One, the aunt, had a conniption fit. Yes, that’s a Southern thing, much worse than the vapors. She devolved from Southern manners down to manipulative Bitch from Hell.

Did you know that if men attend a baby shower, you can no longer decorate with the color pink even if the incubating babe is a girl? Gone were the pink table cloths and the pink plastic pretties and ribbons. But, don’t take time to mourn because there’s more! Did you also know that men cannot be in the same room with an elaborate three tiered cake decked out with fondant and frosting. It boggles the mind to even comprehend it. So, a plain sheet cake will have to suffice. Oh the freaking horror!

Now, all of this might have made sense...and since this is written you can’t see the eye rolling or hear the severe sarcasm but work with me here...EXCEPT... where do you hold a traditional baby shower? At home? In a church?

Oh no! These lovely hostesses rented a room at the local...gym. Oh yes! To get to the lovely cement block room, painted white but still a barren cement block room, the immaculately put together guests would have to walk past a basketball gym, a work out room full of barbells and weight equipment, and *GASP*...sweaty men to get to their lovely pink decorations and pink tablecloths.

Now Hostess Number Two was quite put out with the men being on the list and having the father there. When the blatant manipulation didn’t work, i.e. taking away the pink decorations and the elaborate cake, she contacted expectant Grandma to talk some sense into Baby Mama and make her see reason. Apparently, women cannot talk freely about “intimate subjects” when men are present. The entire debacle upset the Baby Mama to the point of copious tears. Not the expected outcome when one contemplates a baby shower.

Expectant Grandma called me about the situation. I told her quite bluntly I would not be attending the event because the hostesses were mental. We live in the 21st century. Fathers are more involved in the babies lives than they used to be. If the expectant mommy wants the expectant daddy there and he wants to attend, it’s not the hostesses’ call to make. They asked for a list. Honor the mother’s wishes.

The hostesses stated the mother was the focus of the party and all of the attention should be focused on her. Dear pretentious crazy ladies, the focus is on the baby, thus the term BABY shower. Yes, it used to be that only the mommy attended back when you were dinosaurs bearing young. That’s not the case anymore. Besides, mommy didn’t make that baby by herself. If Daddy wants to come, next time, you let him. After all, he already did at least once and that my dear old bats is WHY you are having the shower.

Fleeing the questions and horrific memories in Miami-Dade, Trevor Garrett accepts a deputy position in the small town of Rolling Fork, Mississippi. Plagued by anxiety attacks and an abhorrence to being touched, Trevor rebuffs his best friend’s attempts to set him up. He has no desire for any type of relationship; until the local golden boy strolls into his line of sight at the neighborhood dive…

Logan Andrews just wants to take care of his mama. After years of serving his country in the Army Special Forces, Logan resigns when he learns his mother is suffering from advanced stages of Alzheimer’s disease. A night out with old friends turns heated when the newest deputy in town catches his attention…

When a sexually deviant killer sets his sights on the gay men in the area, Trevor is assigned the case. In a wicked twist, all evidence points to Logan. Can Trevor’s past be repeating itself? In a race against a killer, Trevor struggles to overcome his own insecurities and clear the man whose touch sets him on fire. Will he succeed or will their budding relationship become Collateral Damage? 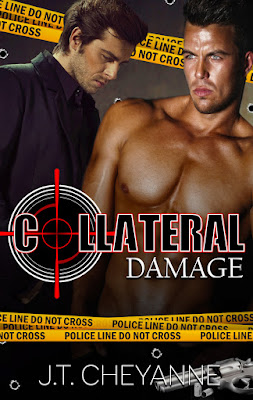 Spray painted names decorated the walls, but none of the gang type graffiti he was used to seeing back home. Footprints tracked the dusty floor. Most of them overlapped heading for the short hallway. A few stray ones meandered off to either side indicating three, possibly four different shoe types.
“Careful where you walk, we don’t want to disturb the unmarred prints,” he said, indicating the intact ones to the left and right. Will huffed in annoyance. “Right, you already knew that. I’ll stop sticking my shoe in my mouth; it tastes like shit.” Will laughed and clapped a friendly hand on Trevor’s back.
“When you’re being an ass, believe me I’ll let ya know. Let’s just get this done so we can get back to the air conditioning,” Will said.
“Gotcha,” Trevor answered and realized as he moved toward the hall, he’d made his first new friend in Rolling Fork. Well except for Logan, and he wasn’t sure if friend was the right word for the man. Fuck buddy? Certainly not a lover; that implied too much intimacy. Trevor hastily shoved his thoughts aside when his cock took notice. He cleared his throat. “How did we catch this?”
“Couple of kids hunting a make out spot came in this morning, maybe an hour ago. While the boy was laying out a blanket and pillows, girlfriend went investigating. When she went to screaming, he thought she’d found a rat or spider. He called 9-1-1 when he finally got her to shut up and moved her outside,” the deputy answered from behind them.
“And, you got their names and statements, right?” Trevor left the question hanging and looked over at the younger man.
“Yes, names and statements. Contact information too, though Krissy wasn’t keen on daddy knowing she was out with Beau. She was supposed to be at Laney’s with her best friend.” Mike answered.
Trevor took several photographs of the hall and then walked carefully down the middle. In a room to the right, Trevor spied the abandoned love nest. The blanket lay stretched across a cleared expanse of bare wooden floor. The pillows lay scattered where the boy had dropped them. A few snaps, including several of the wide array of footprints and he moved deeper into the structure.
A postage stamp bathroom with peeling tile opened on the left. Mold and God only knew what else grew in the bathtub. The toilet had been completely smashed and the sink hung drunkenly from the wall.
At the last door, he found the corpse. He paused in the doorway and winced. Flies buzzed around the bloated body. The smell stole his breath for several seconds. Behind him, Mike again struggled to keep his breakfast down, but he didn’t bolt that time. Will waited for Trevor to survey the scene.
Male, mid to late thirties, dark brown hair, possibly well built beneath the distended, gaseous flesh. Maybe six foot, sprawled on his stomach and naked. Trevor lifted the camera and took a few dozen shots before moving into the room.
“No blood.” Will murmured as he came around Trevor’s left shoulder. “Interesting.” The man circled the body mumbling quietly, but was careful to avoid any clear footprints.
Trevor did his own look-see. The medical examiner was right. No blood marred the scene, but that wouldn’t have been the case if left for another day. The skin was dangerously close to rupture. Breathing through his mouth, Trevor took more pictures and then donned gloves to start the collection of evidence. Will Davis went to his knees beside the body.
Trevor found jeans, a Polo pullover, underwear and socks folded and stacked neatly by the door. He assumed, they belonged to the vic. Wallet, including seventy-five dollars in cash, and cell phone were both tucked neatly into the back pockets of the jeans.
The front pockets disgorged loose change and keys. With his finds, Trevor easily ruled out robbery as a motive. The young deputy bagged each item separately as Trevor handed them to him. Before the wallet was sealed, Trevor checked the I.D.
“Joseph S. Rutledge.” He read aloud.
“Scottie?” From the doorway, Deputy Vann spoke up. Trevor glanced up at him. The kid held the evidence bags against his chest like a shield. Disbelief wreathed his youthful features.
“You know him?” Trevor asked.
“Yeah, he went to school with my cousin, David. He owns the flower shop down on Main. Who the hell would want to kill him?”
“That’s what we have to find out,” Trevor said and rose to his full height. “He have any arguments with anyone in town? Unhappy customers? Old girlfriends?” Trevor paced away from the body and bent to pick up a flash of silver in the corner. Some type of coin, he bagged it and carried to Vann.
“Nah, he’s a homo,” Vann blurted and turned scarlet. His fair complexion lit him up like a Christmas tree. Trevor bristled at the slur.
“He was a man who didn’t deserve to die,” Trevor bit out. “It’s clear he wasn’t here alone.”

#1 Best Selling Author of Grand Slam, J.T. Cheyanne is a genre crosser who writes romance and paranormal in the m/m and m/f genres. J.T. Cheyanne resides in the beautiful state of Alabama. J.T. lives with her two sons and daughter. An avid reader since fourth grade, she has only just started writing her own stories. She also has several works published with her co-author, V.L. Moon. 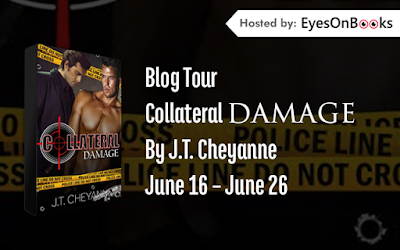