IN THE RAW by Eileen Griffin & Nikka Michaels 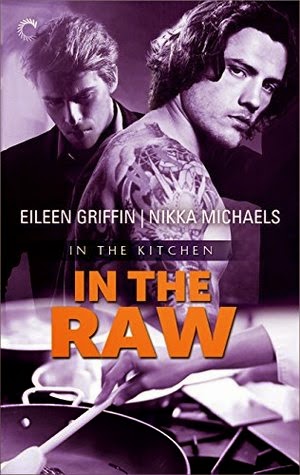 “James Lassiter has had a crush on fellow culinary student Ethan Martin for three years, but has never had the guts to make a move. Putting himself out there is hard, especially when under the thumb–and wallet–of his overbearing parents. Now that bad boy chef Ethan–who is always vying with Jamie for best in class–is struggling with the pastry course, Jamie suddenly has a reason to reach out.

Ethan doesn't mean to be an ass–okay, so mostly he does–but even though he's secretly hot for Jamie, he sure as hell doesn't want help with pastry. Ever since his dad walked out, Ethan has been the one to hold things together and he's done fine on his own. Except that he can't get his cake to rise.

Jamie could be the answer to what Ethan's been missing his whole life–someone to depend on. But with the two competing for the same scholarship, things suddenly get too hot to handle. And if Jamie finds the strength to go for what he wants, he isn't about to settle for what he needs.”

Opposites attract maybe a cliché, it is definitely true in this book. At first glance Jamie Lassiter – Golden Boy – and Ethan Martin couldn’t be more different. The rich pampered Jamie appears to get everything thrown in his lap for nothing more than luck of birth while Ethan has had to battle life for years just to make sure he and his sister Claire kept a roof over their heads and food in their mouths.

As soon as you get to know the two young men a little bit better, it becomes clear things aren’t quite as clear cut. Jamie’s wealth comes with a price in the form of parents who won’t accept him for who he is, try to run his life for him and have his future planned out. Ethan’s tough and stand-offish attitude on the other hand, is his way of shielding himself from all the hurt he knows is waiting for him in the world. When the two come together they need each other to bring their hidden character traits to the forefront. And that is one of the things I really appreciated in this book; the characters are anything but one-sided. Jamie may appear shy and retreating, he is quite capable of standing up to the bullshit Ethan throws his way and knows how to take the initiative. Ethan’s softer and unselfish sides becomes clear in his relationship with his sister, Claire, and the things he is willing to do for Jamie.

Talking about Claire, she was a ray of sunshine in this book. She knows how to put Ethan in his place and keep him grounded with just a few well chosen words that show her deep love for him as much as her no-shit attitude.

And just in case I make this book sound like an angst-fest without relief, allow me to add there were quite a few laugh-out-loud moments in this book too. I’ll never look at a cake tin in quite the same way again.

If I’m perfectly honest I have to admit the first half of the book dragged a bit for me at times. The boys spent a bit too much time in their heads and not enough time with each other or communicating, for my liking. The second half of the book more than made up for that though. I can’t deny I had a pretty good idea of who exactly Jamie and Ethan were exactly because we’d been given that insight into their thoughts and feelings earlier on.

The relationship between Jamie and Ethan was a rollercoaster of angst, happiness and heartbreak. There wasn’t a boring moment once these two gave into the attraction between them. To say they were hot together would be a huge understatement; they were scorching. And I can’t stress enough how Ethan’s need to make everything perfect – not to say orgasmic – for Jamie gave me all the feels.

Now, I have seen a few people give out about the ending of this book in their reviews and I fully expected to join their chorus; I do not like cliff-hangers. But now that I’ve finished the book I have to say I disagree. While it is clear from the ending that Jamie and Ethan’s story is far from finished, it does end in a logical place and, for me at least, on a good, be it teary, note. The fact that I already have the second book on my Kindle may make it easier for me to say that, but I don’t think I’d have said anything else if I had a longer wait ahead of me.

Eileen Griffin and Nikka Michaels have once again proven their awesomeness as a writing team. Their boys leap off the page and fight their way into your heart. I’m delighted I have two more encounters with Jamie and Ethan to look forward to.
Posted by Helena Stone at 16:12