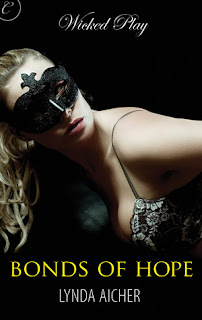 Quinn's been taking direction all her life, so submitting to a Dom comes easily. But it's not just the most amazing sex she's ever had—Marcus challenges her to define her own needs and make her own decisions. And when her training is over, Quinn will have to choose between continuing to play a part in her own life, or living by her own rules.”

Over the past three books, “Bonds of Trust”, “Bonds of Need”, and “Bonds of Desire” I have come to love the world and characters Lynda Aicher has created. And “Bonds of Hope” is a very welcome addition to a wonderful series.

In this book we meet Quinn - or as her fans know her, Missy – who has been in the lime-light since she was eight years old. Hoping to get away from her image as the cute girl she has accepted the role of a submissive in a new television series and, determined to get it right, she has come to The Den for a week of training with one of their Doms. Quinn is not trying to decide whether or not she actually is a submissive at heart, all she wants is to portray one believably. And if that means playing a part while in The Den, that is fine with her. She’s done all the research she could do on line and is well prepared to be the perfect sub for her temporary Master. 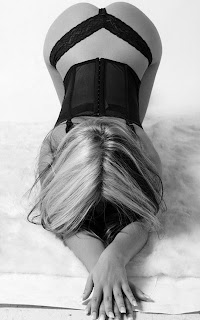 “It was time to become Q – the obedient submissive to a strict, controlling Dom.”

Enter Marcus. One of the new joint owners of The Den he loves his job. Giving his clients the submission they crave fulfills a need deep inside him. When he comes face to face with Quinn though he has his doubts. His instincts tell him there is a true submissive hiding underneath the facade presented by the actress. What he doesn’t know is if he will be able to get her to recognise that over only one week of training, or if one week will be enough to deal with all the issues she’s clearly carrying around.

“But was one week really enough time to take away any of that hurt? He wasn’t certain, but he was sure as hell going to try.”

This week was only supposed to be about training Quinn so that she could play her new role convincingly, but it isn’t long after they have started their sessions that both Marcus and Quinn start experiencing feelings they weren’t expecting and aren’t ready for. Quinn has little to no control over her own life. Everything she does is determined by her mother, her agent and her publicist. Giving up her control once again is both something she does almost automatically and something she is very reluctant to do. It will take time before she realises that, in submitting, she isn’t giving away her power:

“Another lesson for you. The sub always has the power. The Dom in the facilitator. The submissive controls the Scene.”

Almost despite herself she finds herself really falling into her submissive role with Marcus.

“So many possible answers flooded her mind, but her mouth said, “Yes Sir.””

It takes a few days, but it is a revelation when she realises that:

“He’d hurt her. But he hadn’t harmed her. That was the difference, the one that had clicked in during the Scene.”


When the week of training is over and the real world intrudes on what has been seven days of pure bliss, Quinn travels back to Hollywood, leaving Marcus behind both heartbroken and bewildered. It will take a near disaster and a miracle to get Quinn to realise what she has given up and that it is time to take control of her own life. And it seems that control over her own life comes with submitting to the Dom she has grown to love.

“How’d you get so smart, kitten?”
“I learned from someone who was patient enough to teach me.”


I have to admit that this was the first book by Aicher in which it took me a very long time to get to like the main female character. I couldn’t get a feel for her at all for a very long time and for a while there was a risk that this might actually make me like the book less than I had the previous ones. It was only near the end of the story that I understood that this was probably how I was supposed to feel about Quinn. The real Quinn had been hidden for so long that even the girl herself wasn’t quite sure anymore who that might be. It took her time with and separation from Marcus to give her the insight and the courage to take control of her own life. And once she does, boy does she make up for all the pages on which she appeared to be barely there. Quinn’s growth in this story is so subtle that it doesn’t become clear to her or the reader how far she has come until it is almost too late to benefit from it.

Marcus, on the other hand, I adored from the moment he was introduced. He is the sort of man all of us would love to have in our lives, full of understanding, patience and love. And I loved that by the end of the story the roles are slightly reversed; trust the submissive to tell the Dom how their relationship is going to work.

Like I said before, I have fallen in love with these books and I’m delighted that there are more titles to come in this series. The book I’m holding out for though, the book I really want to read – although I’ve no way of knowing if that particular one is even in the planning – is Rock’s story. I really hope that this man, normally in the background keeping everybody safe, will be given his own Happily Ever After.