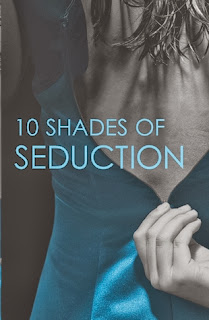 “Are you aching for more shade?

You know you want it.

This is a book consisting of ten different stories by eight different authors and as such impossible to review as one book. In fact, I’m not even going to try. Below are my thoughts on each individual story as well as a separate rating for each of them. In the past, when reading an anthology, there would be at least one story that didn't work for me at all; at least one that would let the rest of the collection down. How wonderful to find a collection in which every single novella worked for me. Granted, some worked better than others, but much to my delight none of them disappointed.

As the blurb suggests all of these novellas deal with Domination and submission in some form or another and all of them are explicit and sexy as my short descriptions and selected quotes will show.

Submit to Desire by Tiffany Reisz (5+)

Featuring the fabulous and oh so sexy Kingsley Edge from the “Original Sinners” books.

Filled with Tiffany Reisz’s trademark humour, sexiness and sparkling characters this story was exactly what I knew it would be; a pure delight and enticingly hot story.

“What you must understand is that submissive women are not weak. They are often much stronger than the men who dominate them. They have to be strong and brave to submit without losing themselves.”

“You can be afraid all you want. Just don’t let your fear stop you.”

“Vanilla sex is all about trust. Rape is all about fear. In that place between fear and trust is where we live.”

“Charlie, in this house, the word slut is the highest compliment I can give. It means you are a person who owns her sexuality and is unafraid to experiment and open her mind and body to new experiences.”

Willa meets her ex-husband James at a school reunion after they've been apart for three years. Things have changed though. The push-over Willa used to order around no longer exists. This new James is confident, and in total control. This new James makes Willa feel like an insecure teenager before they've even exchanged a word. The new James shows Willa that life and love will be better if she’ll just give up control and submit to him…at least some of the time.

A wonderful story about two people who were meant to be together but messed it up getting and taking their second chance.

“I decide I’m never going to hold back either. I’ll try anything, do anything…at his command.”

Story set in an office environment. Glory is being pursued by new guy Clement Johns while she already is having an affair with her boss, Bruce and has also been seeing Alex, a client of the company she works for. While this makes for lots of heated and steamy encounters it also made this a story I wasn't quite sure what to make of. At some point Glory thinks:

“I was beginning to feel like an indentured whore who’d let out her vagina for the duration of her employment at Davies and Birch.”

I have to admit that’s exactly the impression she left with me. A well written story that didn't really work for me.

Ellis is only weeks away from homelessness when her friend Sasha treats her to a trip to where they will stay with Stefan, a very rich uncle of Sasha’s.
While Ellis expects a two week holiday before she has to return to her desperate situation in , she finds something completely different. Ellis is on a journey to a place where all her fantasies - all the sexy stories she has ever written - are about to come true. Ellis can leave her troubles behind and enter a world filled with pleasure; a happily ever after story without an end.

“I will never run out of ways to make you come.”

“When Jack calls at 6:00 p.m. on a Saturday and tells me to meet him in the bar at the Embassy Suites, I know two things: he wants to fuck me, and I will let him.”

“He doesn't look like a man who can make a woman lose her mind. But he is.”

When “I” meets Jack she does what he asks without question. Jack is in control and if the narrator follows his instructions he’ll bring her to the heights of passion. This is a wonderfully sweet yet very sexy story. The “revelation” at the end didn't come as a surprise, but I don’t think it was supposed to. A thoroughly enjoyable read.

Dante Ricci, rich entrepreneur planning to expand his empire in wants Sonya Miller, a highly ambitious corporate lawyer to work with him on this project. Contract negotiations and dinner lead to a rather unexpected game during which Dante demands Sonya’s trust and submission and the independent and always in control young woman learns that submitting has its own benefits.

“Give me control. I’ll be gentle”

A charming and sexy story although I can’t help feeling it would have been better if it had been longer, maybe even a full-length novel.

Miranda Austin, corporate highflyer feels drained and fed up after an especially difficult meeting. When her personal assistant Patrick Dove suggests taking a few hours out of their day to get away from it all, Miranda knows he doesn't mean having a cup of coffee together. An afternoon away from the office, submitting to Patrick’s demands is just what Miranda needs and what started as a one-off turns into a regular event. But can an office affair ever work? And what happens when lust turns into real feelings? 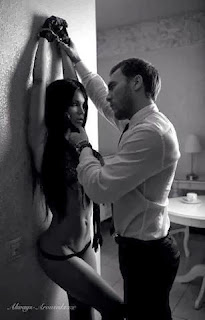 “In the midst of crazy sex, she found serenity in his quiet, solid presence, over and inside her.”

“There was strength in giving in, it was her choice, what she wanted in this moment.”

“Yes…with you, I don’t have to decide things or control things or take responsibility. I can just be.”

Rarely has a quote had the personal resonance that the following has:

“And if you get too uppity, we’ve always got the cottage.”

Tied up & Twisted by Allison Tyler (5)

When Hadley McCarthy goes to the gym to interview Reed Frost she feels an instant connection; he is the man she wants to submit to. Guy does the PR at the gym and has arranged for Hadley to do the interview. He hasn't seen her for a year but wants her back; he can’t wait to submit to her again. But Hadley has no inclination to return to Guy or her past as a Domme. And Reed Frost has steered clear of relationships for seven years and has no real urge to get involved with anyone again. Will anybody end up with who they want and need?

“I want to live in a world where everyone gets what they need, and nobody is punished for their desires.”

Mark and Becky have been planning their weekend away for a month, but now that it is here Becky is afraid; afraid that she might not live up to Mark’s expectations; afraid that she may not be able to give him the submission he wants, and herself the release of control she has been craving for such a long time.

A very sexy and sweet story about a married couple taking their relationship one step further.

Imogen is an independent and powerful woman who doesn't think she needs a man but finds herself ever more frequently spending the time in between work and sleep with Giles, a younger Dominant man who knows how to give her the pain she craves with her pleasure. Now Giles wants to take Imogen beyond her comfort zone; he wants her to submit to him completely. Will Imogen be able to agree to rope bondage – shibari – or will her need to never lose control completely make her deny both herself and Giles the opportunity of being happy together?

“This, shibari, is about the next level for me. It’s a sign of ultimate commitment and trust.”

This is a wonderful collection of novellas. One that has given me hours of pure reading delight, reacquainted me with favourite authors and introduced me to what are sure to become new must read writers. A little slice of reading heaven!
Posted by Helena Stone at 17:31