BONDS OF COURAGE by Lynda Aicher 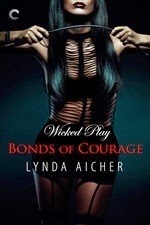 Pro hockey player Holden Hauke has kept his sexual needs buried for years. After a near miss over a picture of him bound to a spanking bench resulted in a mid-season trade, he's kept his image clean. But with the season over, he's ready to surrender control. And he's found just the woman to help him—if only he can convince her to give him a chance.

Bending men to her will is nothing new for Vanessa Delcour, aka Mistress V—she's a full-time rep for pro athletes, a part-time owner of exclusive sex club The Den, and an experienced Domme. But when Holden Hauke comes looking for a discreet partner, Vanessa's concerned about his motives. Touching his training-toned body during a scene wouldn't exactly be a hardship, but taking him on crosses barriers between work and play that she's had in place for years.

From their first intense encounter in Mistress V's playroom, Hauke knows he can't let this chance slip away; he's found the woman he's always needed. Submissive or not, he's willing to push her every limit to prove how good they can be together.

‘Bonds of Courage’ is the sixth title in the ‘Wicked Play’ series and more than lived up to the expectations I had based on those earlier books. Over the course of six books I have gotten very attached to The Den, the people who own the place and their partners.

This instalment features Vanessa Delcour – full-time rep for professional athletes, partner in The Den, an exclusive sex club, and known as Mistress V an experienced Domme. For years she has successfully kept all the threads of her life separated and she is determined to keep it that way. Vanessa is in control of her life and doesn’t allow anyone to breach her carefully set boundaries or anything to control her. It is a balancing act but a successful one until Holden Hauke applies for membership at The Den.

Holdon Hauke is a professional hockey player. He has kept his sexual needs and desires buried, especially after one indiscrete photo of him tied to a spanking bench nearly cost him his career and forced a mid-season transfer. With the summer break on his hands Holden turns to The Den in the hope of finding a discrete Mistress. One look at Vanessa is enough to tell Holden he’s found what he’s been looking for.

With their first encounter going off to a bad start because of Holden’s lie on his application to The Den and Vanessa’s reluctance to let anyone in to her life never mind her heart a relationship between these two seems doomed from the start. Holden is not prepared to give up though. He may be submissive, he is determined to do whatever it takes to show Vanessa that they belong together.

For the sixth consecutive time Lynda Aicher has brought her readers two characters who are interesting, easy to root for yet realistic and flawed. I fell in love with Holden the moment he made his first appearance. I loved the ease with which he surrendered to his needs despite the risks involved and Vanessa’s attempts to push him away, and delighted in the release he found in bondage.

“The firm clasp of the thick bands of leather was his freedom.”

Vanessa was a little bit harder to like. She was so determined to be independent, to keep all the different threads in her life separate and avoid all attachments, that it was almost too easy to believe she really was the hard bitch she portrait herself as. That image made the rare occasion on which her hard shell cracked all the more beautiful though.

“It made no sense, but he was under her skin, burning through her as no other sub ever had.”

“He could make her happy. Please her. He got everything he needed by giving her what she needed. It was a perfect combination that.”

I loved Holden for getting Vanessa, for taking his time and for reading her well enough to know what all her small sign and gestures meant. I loved the moment he gave her a pair of flip-flops.

“The only time she wasn’t in heels was when she let her shields down, and he wanted that all the time with him.” 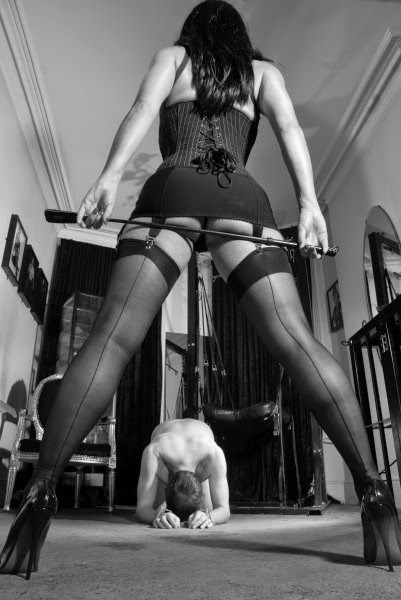 I’m very grateful that although there is lots of angst and conflict in this book I didn’t have to read my way through a lengthy split between the protagonists based on fear or a misunderstanding. I’m equally happy that the author kept things real; the resolution of issues was organic and believable.

Overall this was a wonderful, smooth, very sexy and fascinating read. The descriptions of Vanessa’s sessions with Holden were captivating as were the occasions when the two of them gave into their feelings without any play involved.

I discovered that there is one more Wicked Play story to come in September 2014. While I’m delighted to have another book in this series to look forward to I am already sad that book will also mean I’ll have to say goodbye to The Den and all who play and love there.

“I’m yours. In every way. Beyond the playroom. Beyond the spankings and bondage and play – I belong to you.”
Posted by Helena Stone at 16:09